The Right to Repair Movement 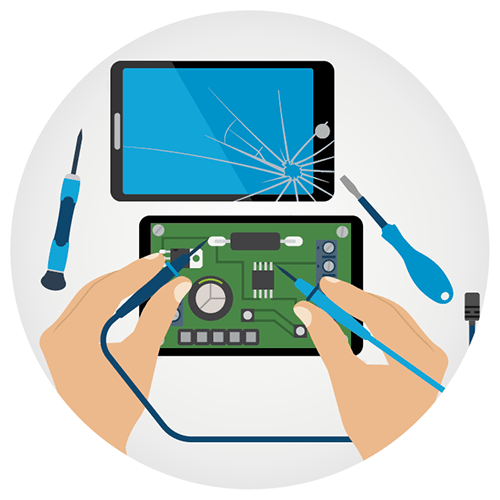 What is the Right to Repair?

In its simplest form, the 'right to repair' movement wants you to be able to fix your own stuff.  In our industry, it is centered around advocating for individuals and small businesses to be able to fix electronic equipment.

You might ask yourself, well, what’s the issue? What’s stopping people from fixing their electronics if they own it? There are a few obstacles in the way that prevent consumers from having full access to the parts, diagnostic equipment, and manuals needed to keep their electronics running smoothly. A closely related situation is the ability to repair personal vehicles. When its time to get that routine maintenance or if it is something more serious, we all have the option to choose where we want to take our car to get fixed. That is because there is legislation in place that allows local repair shops to have the same parts, diagnostic equipment, and manuals that the manufacturers have. The same legislation allows for the installation of aftermarket parts (Parts that are not OEM) on vehicles if the consumer wishes to. The issue is that this type of legislation does not exist for electronic equipment.

Arguments for The Right to Repair

One if the most prevalent arguments for the Right to Repair is the fact that consumers own their devices and should have the right to do whatever they want with it.

In some cases, the manufacturer is the only option for repair when it comes to electronics. Without any competition, the manufacturers can inflate repair prices a monopolize the repair business. In other instances, manufacturers have even rendered some electronics useless through software tactics because consumers have used aftermarket parts on their equipment. The companies who make these products don’t want consumers to be able to fix them on their own. They’d rather make money from repairing them or convincing you to purchase a new device. Their focus is to sell as many newer model devices every year as they can. This yields the most profit for them. Cars can run for decades when maintained properly so car manufacturers must innovate the newer model cars to appeal to consumers. Electronics are essentially the same and can last a very long time if well maintained. If consumers don't have the necessary parts or equipment to maintain their devices and are being restricted by manufactures, why would companies need to innovate?

Arguments Against the Right to Repair

The lobbyist for major electronics manufacturers often argue that allowing anyone to have access to manuals and blueprints of certain electronics can unlock a door for hackers to enter at will. For example, they claim that someone could hack into your cell phone and conduct malicious activity if they had access to the right information.

When it comes to repairing electronics, some equipment is more difficult to repair than others. Those who are opposed to the Right to Repair argue that if the person repairing the equipment doesn’t know what they are doing they could hurt themselves or destroy their equipment.

Where do you stand?

The only way things change is if we discuss them. What’s your stance on the matter? Do you want the right to repair the things that you own? Or would you rather leave it in the hands of the manufacturers? Back in March of 2018, there were only 8 states that had bills pending for the Right to Repair. We wrote a similar article back then called The Simple Guide to “Right to Repair" that you can also read.  As of 5/6/2019, there are 20 states that now have active legislation in support of the Right to Repair. Those states include California, Georgia, Hawaii, Illinois, Indiana, Massachusetts, Minnesota, Montana, Missouri, North Dakota, Nevada, New Hampshire, New Jersey, New York, Oregon, South Dakota, Vermont, Virginia, Washington, and West Virginia. The Right to Repair has gained a lot of momentum and activist for the bill are optimistic that 2019 will be the year legislation is passed in their favor on a federal level. Presidential candidate, Bernie Sanders has come out in support of the Right to Repair bill. If you would like to support the Right to Repair, reach out to your state representatives and voice your opinions. You can also share this info with friends and family and have them reach out to representatives too. The more we talk about it the closer we get to a resolution. In conclusion, we should all stand for something or we will inevitably fall for anything.